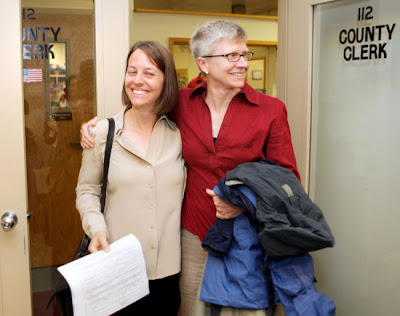 Above: Longtime Madison LGBT community leaders and 8-year partners Tamara Packard and Renee Herber were among the first to sign up for the new Wisconsin domestic partnership registry in the office of the Dane County clerk. Photo: Mike DeVries, The Capital Times 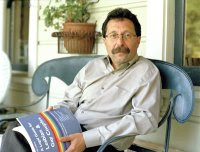 This week's special guest is Attorney Frederick Hertz, co-author, with Emily Doskow, of "Making it Legal: A Guide to Same-Sex Marriage, Domestic Partnerships & Civil Unions." As pictured above, countless Wisconsin couples celebrated on August 3rd, the first day of statewide registration for same-sex domestic partners. As the Wisconsin Capitol Pride celebration gets underway this weekend, many couples will be renewing their commitments to one another at a beautiful public ceremony on Friday at 5pm in the State Capitol.

And in recent months, many Wisconsin couples have taken the additional step of being married out-of-state (such as in nearby Iowa), or abroad, in jurisdictions that now recognize same sex marriage. How do and don't these rights transfer across state lines? What questions should be asked before a couple decides what choice is right for them, and is that choice always marriage or other variations on marriage? 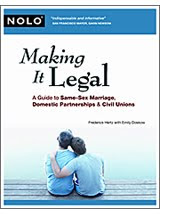 Given the many legal challenges and legislative battles that lie ahead, no one knows exactly what path this all may take. Our guest Fred Hertz is an Oakland-based attorney who will provide many insights and valuable advice, helping to us explore the current confusing crazy quilt of laws affecting same sex couples nationwide. A native of Minnesota, he proudly points to the pioneering role for legal recognition of LGBT families that’s long been played right here in the Midwest.

He also comes at this issue with a fresh approach, resonant with his own decision not to marry despite his 27 year-long same sex partnership—the notion that marriage may not be for everybody--and that’s a discussion with relevance to couples and individuals both gay and straight. Regardless, though, he believes in the power of entering into any partnership with eyes wide open, and clear understandings about how finances, caretaking, and other issues will be handled. He also observes that LGBT people--in forging creative new solutions to these challenges and persevering despite the obstacles--may even have a few things to teach their straight counterparts about the meanings behind marriage and other partnership agreements. 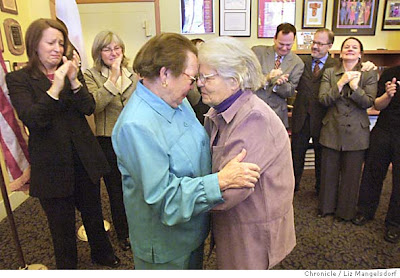 Above: Longtime activists Phyllis Lyons and Del Martin were married in a June 2008 ceremony at San Francisco's City Hall, after 57 years together.

This week’s edition of Forward Forum is on tape, so we won’t be able to take your calls. However, we’ll be back live next week. And if you have questions or comments to share in the meantime, please write to us at ForwardForum@aol.com or feel free to leave a message on our blog below.

Take care, Happy Pride (see article immediately below), and have a great week!

Article and Video from the Cap-Times on Aug. 3rd Domestic Partner registrations

Dec. 2008 Video Interview with Fred Hertz on the biggest challenges he faces in mediations

Making it Legal Website; With Updates to the Book and Links to the Co-Author's Blogs
Posted by John L. Quinlan at 2:43 AM 0 comments